As part of this annual awareness campaign that draws attention to censorship ALA (American Library Association) has partnered with fellow cosponsors of Banned Books Week to host a virtual “Read-Out” where readers from around the world will be able to participate! 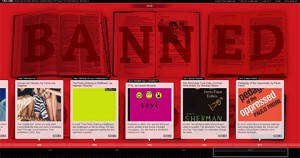 A Catholic school student who identifies herself by the avatar name “Nekochan” started an unofficial library of banned books that she runs out of her locker at school. She began to lend books to her classmates when her school banned a long list of classic titles, including The Canterbury Tales, Paradise Lost and Animal Farm.

Concerned about getting in trouble for violating school rules, Nekochan wrote a letter to an online advice column to ask if it was “ok to run an illegal library” from her locker.

Nekochan wrote about the recent book ban: “I was absolutely appalled, because a huge number of the books were classics and others that are my favorites. One of my personal favorites, The Catcher in the Rye, was on the list, so I decided to bring it to school to see if I would really get in trouble. Well… I did but not too much. Then (surprise!) a boy in my English class asked if he could borrow the book because he heard it was very good AND it was banned! This happened a lot and my locker got to overflowing with banned books, so I decided to put the unoccupied locker next to me to a good use. I now have 62 books in that locker, about half of what was on the list.”

Throughout history, some of the most culturally important books have been banned, drawing attention to the important issues they present and, ironically, making them more enticing, especially to young readers.

Books are still being banned or challenged in today’s society. Just last week, a North Carolina County School Board voted 5-2 to ban Ralph Ellison’s “Invisible Man,” stating that they found “no literary value” in the work and that it was “too much for teenagers.” “Invisible Man” is one of the most famous pieces of literature about Black life in America in the 1950s and won the National Book Award, so the school board’s assertion that it had no literary merit is, at the very least, questionable. It is also the number one most cited book on the College Board’s Advanced Placement English Literature and Composition exam.

Just a few days before North Carolina’s decision, in Arizona, “Dreaming in Cuban,” Cristina Garcia’s critically acclaimed book about politics and family after the 1959 Cuban Revolution, was banned. The American Library Association says that the book has never been banned before, even though the parent who challenged the book cited sexually explicit material. Considering Arizona’s long history of banning books and stripping courses having to do with Latino/a culture, this decision is questionable as well.